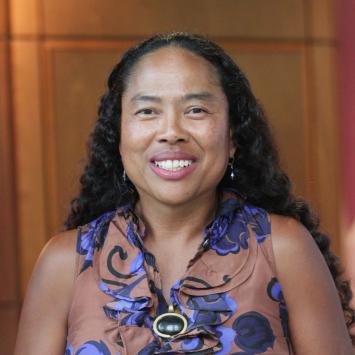 Before joining the academy, she served as an Assistant United States Attorney with the Department of Justice, where she specialized in large-scale drug and sex-trafficking prosecutions. As a federal prosecutor, she briefed and/or argued more than 44 federal appeals.

Professor Cook clerked for the Honorable Damon J. Keith of the United States Court of Appeals for the Sixth Circuit. She was also an associate at Miller, Canfield, Paddock and Stone in Detroit and Seyfarth Shaw in Chicago, where she specialized in employment discrimination, labor law, and sexual harassment litigation and prevention training.

Professor Cook has established herself as a leading expert on sex trafficking by problematizing the entire spectrum of sex-trafficking prosecutions and the commercialization and exploitation of women and girls. She is actively involved in shaping the emerging nationwide discourse on sex trafficking and victims' rights as it relates to evidentiary issues, race-class-gender profiling, victim blaming, and sex-trafficking statutes. She writes in the areas of sex trafficking, victims’ rights, police violence, implicit bias, criminal procedure, critical race theory, human rights, race and gender discrimination, black feminist legal theory, womanist thought, and the normative gaze of identity.

Her years of practice in the public and private sector inform her teaching philosophy and passion. Her mission is to deconstruct and make readily accessible and transparent the principles and practices of law in ways that are meaningful to students, not only for professional development, but also as a means of augmenting the role that advocacy plays within law and litigation. Professor Cook has taught Criminal Procedure, Criminal Law, Evidence, Race and the Law, Critical Race Theory, Critical Race Feminist Theory, and a seminar in Sex Trafficking.

Professor Cook is a frequent and sought-after speaker at workshops, conferences, and sexual harassment and implicit bias trainings. She has been a presenter and guest speaker at Yale University, the University of Michigan, AALS, and the Daughters of the Atlantic Conference in Bahia, Brazil. In 2017, she presented a TEDx Talk, entitled Caught: Calculating the Moves of Power in Our Midst, where she developed an algorithm for capturing power as it is raced, classed, and gendered based on the parable of the Woman Caught in Adultery. In 2018, she was a Scholar-in-Residence at the Thelton E. Henderson Center for Social Justice, the University of California Berkeley Law, as well as the Annual Ruth Chance Lecturer Honoree.