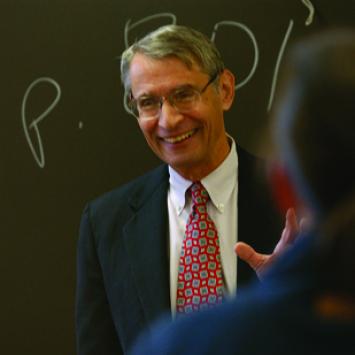 Alvin L. Goldman is a Professor of Law Emeritus at the College where he taught Labor Law, Employment Law, Constitutional Law and Negotiations. He joined the faculty in 1965. Prior to teaching, he practiced with Parker Chapin & Flattau in New York City. He is a graduate of Columbia University and the New York University School of Law where he served on the NYU Law Review and as an Arthur Garfield Hays Civil Liberties Fellow. He was Professor-in Residence at the National Labor Relations Board (1967-68), Scholar-in-Residence at the Institute for Labor Law, Leuven University, Belgium (1973), and visiting professor of law at the University of California at Davis (1976-77).

Professor Goldman has published several books including the texts, Settling for More: Mastering Negotiating Strategies and Techniques, Negotiation: Theory and Practice (with Professor Rojot of the University of Paris) a casebook,Legal Protection for the Individual Employee (with Professor Finkin of Illinois, Professor Summers of Pennsylvania and Professor Dau-Schmidt of Indiana) a treatise, Labor and Employment Law in the United States and book chapters, and pieces in journals including the NYU Law Review, the Ohio State Law Journal, the Industrial Relations Law Journal, and the Comparative Labor Law Journal.

Though retired from teaching, Professor Goldman continues to publish legal articles and book chapters, is co-U.S reporter for International Labour Law Reports, and serves as an arbitrator in labor-management disputes.