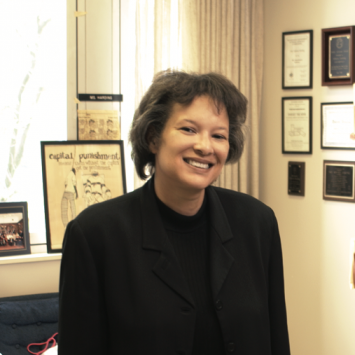 Professor Harding is a nationally and internationally known expert on the death penalty. She was invited to be a Visiting Scholar at Oxford University’s Centre for Criminological Research where she researched capital  punishment issues and lectured at All Soul’s College. She has lectured locally, nationally, and internationally, including in England, France, and Israel, about  the death penalty and other criminal law topics. Since 1990 Professor Harding has been involved with capital litigation as trial, appellate, and post-conviction counsel for the defendant and also as a consultant. In 1997, pursuant to her request, the Italian Parliament enacted legislation requesting then Kentucky Governor Paul Patton to commute her client Harold McQueen’s death sentence.

Professor Harding is a Legal Expert and Analyst for TRUTH, JUSTICE AND THE AMERICAN LIE item 52, a Netflix Original Series that investigates a claim of actual innocence in a Nebraska capital case. The multi-episode film is being made by Middlewest Studios. She’s also appearing in an upcoming episode of the CNN television series Death Row Stories.

Because of Professor Harding’s expertise in capital punishment the American Civil Liberties Union of Kentucky asked her to be one of the 60 participants in the 2015 Faces of Liberty Project, which profiles individuals who have played important roles in protecting the civil, political and legal rights of all people. See http://www.aclu-ky.org/wp-content/uploads/2015/11/303088_Inside.pdf, at 32.

Professor Harding’s research interests are evident in the courses she teaches. She teaches an introductory Criminal Law course to first year law students and Capital Punishment and Race, Racism, and the Criminal Law to second and third year law students. She also teaches Animal Rights, an upper level course. Professor Harding was instrumental in launching the College of Law’s nationally recognized Innocence Project Externship and served as the Externship’s Faculty Supervisor for more than a decade.

Scholarship can be downloaded at Roberta M. Harding's SelectedWorks page.